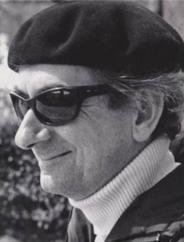 In late 1954 Blackman moved to Avonsleigh with his wife and poet Barbara Patterson Blackman in a house opposite Joy Hester on the Macclesfield Road. They stayed for six months and his moonlight paintings were inspired by his late-night walks home from town. It was the first time Blackman had ever lived in the country and he claimed to have been quite haunted by the experience. While in Avonsleigh he, his wife and Hester were witness to a bushfire from which they had to flee.

This period was one of critical self-appraisal for Blackman and he often burned many of the works with which he was unhappy with, a habit that Joy Hester was able to convince him to abandon.

His return to the city saw the creation of arguably his most famous Alice series which was inspired by Lewis Carroll’s tales of Alice in Wonderland. During this time he worked as a cook at a café run by art dealer Georges Mora and his wife, fellow artist Mirka Mora.

Blackman became known as a member of the Antipodean Group in 1959 after he and a number of other Melbourne artists – including Arthur Boyd, David Boyd, John Brack, Robert Dickerson, John Perceval, and Clifton Pugh – signed the Antipodean Manifesto, a statement that protested the dominance of abstract expressionism over figurative art.

In 1960 Blackman and his family moved to London after he won a Helena Rubenstein travelling scholarship. On his return he settled in Sydney where he has spent most of his life.

In 1970 he moved to Paris, when he won a residency for the atelier studio in the Cité des Artes and lived there for a year. Paris remained a rich vein of inspiration for him and he returned there often.

Blackman was appointed an Officer of the Order of the British Empire (OBE) for his services to Australian art in 1977 and his life has been an inspiration for other artists. John Molvig won the 1966 Archibald Prize for his portrait of Blackman.

His paintings were characterised by a mystical dreamlike perspective that captured his view f the human condition. His painting Floating Schoolgirl (1955) provided the inspiration for Ursula Dubosarsky’s novel The Golden Day (2011).

An increasing dependence on alcohol contributed to the end of his marriage after 27 years and saw his career slide into dormancy. This hiatus was broken in the 1980s, but the onset of dementia has diminished some of his creativity. He still lives in Sydney where he is assisted and cared for by a group of dedicated friends.