Helter Skelter, Hands off our Shelter 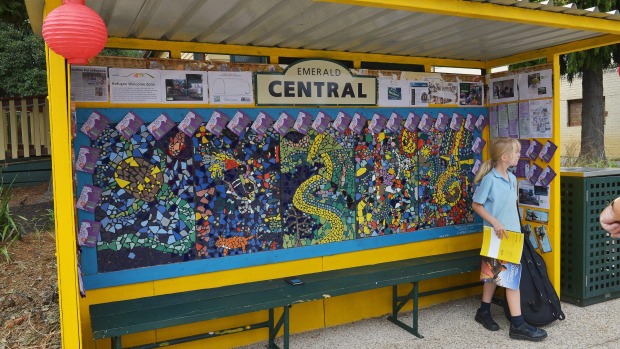 ‘This is our Alamo’: Emerald community battle over bus shelter enters third week

The Kelly gang was rumoured to have come through Emerald and held up a couple of hayseeds. It probably didn’t happen. The town – which has a few bins knocked over a couple of times a year – is short of hooliganism in its history. That is, until two weeks ago.

A range war has broken out between the local council and community leaders of the hill town over a bus shelter – a pretty little structure decorated with mosaics, painted in cheery circus colours and otherwise reeking of quaint village charm that has taken on emotional and somewhat violent symbolism.

“This is our Alamo,” says Mary Farrow, of the Emerald Community House, which sits behind the shelter.

The siege of the Alamo lasted 13 days. The battle for the bus shelter has entered its third week. On five occasions, a council truck has turned up in the dark, and let loose with power hoses. Community notices, including CFA advice, and personal letters and posters of support for asylum seekers, were washed into the storm water drain. The mosaics were damaged, paint chipped and supporting woodwork caused to warp.

Each morning, after the raid, Blair, Farrow and other locals have emerged with their paint brushes, hammer and nails, staple guns, mops and broom, and set to fixing the little shelter. As the battle wore on, they started painting messages along the top beam: “WE ARE NOT COMPLIANT.”

“Some of the art was produced under a state government grant supporting troubled youth,” says Noelene Blair, who volunteers at the community house and is an organiser of the town’s annual arts festivals.

At the tail end of the first raid, Blair confronted the council workers who said they had been ordered to remove graffiti. She says that initially they had contacted their boss, Kevin Alexander, to say there was no graffiti. “But they they were told to get rid of everything.”

Kevin Alexander wouldn’t talk to the Sunday Age, nor has he answered questions from angry locals, including local businessman and presenter at the community radio station Bret Townsend. “Kevin told me to talk to press officer, but she wouldn’t talk to me either.”

Marg Gemmell, the retired school teacher and Emerald resident of 45 years, assumed the council was cracking down on the refugee-related material, which had been the subject of a local newspaper story. “I didn’t mind the refugee posters, but if the council wanted to take them down, why didn’t they remove them carefully? Why did they have to leave the shelter looking such a mess. It’s been kept in a lovely state.”

There have been no answers, no communications from the council at all – save for the raids.

On the face of it, this is yet another story about how a community manages its public spaces coming into conflict with blunt-headed bureaucracy – and its been playing out gleefully in the local papers. However, seven years ago, Emerald Community House – which organises various local events, including the council-funded PAVE arts festival – asked for permission to install artworks in the two local bus shelters. The discussions, says Mary Farrow and other locals, led to an agreement by the council that the community house would be responsible for the care and maintenance of the shelters. Bret Townsend says this was in line with the council’s community engagement policy.

“Whenever the shelters needed some maintenance, it was put on to the community house to manage,” says Townsend.

So what’s all this nuttiness about? One theory is that Liberal party puppeteers behind the council were unhappy about the refugee activism. But the answer may be more prosaic. New glass bus shelters – of a sort that vandals enjoy kicking in – have started appearing in the Dandenongs. Blair, Farrow and others now believe the raids were meant to destroy the existing shelter – which is actually owned by Public Transport Victoria, and not the council – and replace it with a new charmless one.

On Friday night, after we texted half a dozen councillors and requesting a conversation, the mayor of Cardinia shire, Jodie Owen, replied: “I wish to advise that Council is setting up a meeting with the Emerald Community House next week to discuss the issues and develop a solution that is agreeable to both parties.”

Good thing too: Mary Farrow was planning to plant video cameras in nearby bushes, hand the evidence to police, and demand the offenders be charged with vandalism. Awkward!