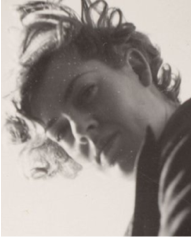 From 1950 to 1956 Hester lived at Avonsleigh and Upwey in the Dandenong Ranges. Her watercolour and ink Bushfire, Avonsleigh (1955) was created in that time. The reoccurrence of Hodgkin’s disease which had been in remission since diagnosed in 1947 caused her to leave the area for Box Hill where she spent increasing amounts of time in hospital.

Her early career unfolded in Melbourne.  She was educated at St Michael’s Church of England Girls’ Grammar School, St Kilda. In 1936 she completed the first year of an art-and-crafts course at Brighton Technical School but abandoned it, preferring to attend life-drawing classes at the Victorian Artists Society, East Melbourne. In 1938 she became a founding member of the Contemporary Art Society.  She exhibited in its inaugural exhibition the following year.

Between 1938 and 1947 Hester was part of a stimulating and innovative circle of painters—among them (Sir) Sidney Nolan, Arthur Boyd, John Perceval and husband Albert Lee Tucker whom she married on 1 January 1941. The group was colloquially known as the ‘Angry Penguins’, after the art and literary magazine of the same name. She was the only woman artist in the group. It met regularly at Heide, the home of the art patrons John and Sunday Reed.

Hester rarely painted, favouring the media of brush and ink, a choice that set her apart from her contemporaries. If it determined her style and method, it also meant that during her lifetime her art received little attention. Drawing was not valued as highly as oil painting and seen as preparatory to the finished work of art. Hester’s method of working—sitting on the floor in company and rapidly producing her drawings—meant that she was viewed as a casual rather than a serious artist.

She chose the human face as her motif. Her portraits of friends and family were incisive, while the ‘Gethsemane’ series (1946-47) concentrated on upward-gazing, hallucinatory heads. Her immediate influences included German Expressionism, the Russian emigrant painter Danila Vassilieff, and Picasso. She was also directly influenced by the newsreels shown in 1945 of Nazi concentration camps. An important early series, ‘From an Incredible Night Dream’ (1946-47), was inspired by Jean Cocteau’s book Opium (1930) detailing his recovery from addiction.

In the two years 1948-49 she produced some of her finest drawings: the ‘Face’, ‘Sleep’ and ‘Love’ series inspired by her lover Gray Smith for whom she had abandoned her husband and young son and eventually married in 1959. She exhibited these in 1950, together with a selection of her poems, placed on the walls next to the drawings.

In her last years she produced her largest drawings. The image of a large-eyed child, holding an animal, dominated this period, as did the subject of ‘The Lovers’ (1956-58) where fear and sexual passion were mingled in the embrace between man and woman. In the same years her poetry was concerned with romantic love and with metaphors of the natural world.

Joy Hester died on 4 December 1960 at Prahran and is buried in Box Hill cemetery.