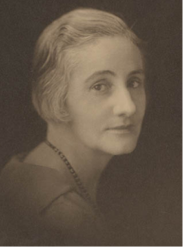 Katharine Prichard lived in Emerald during the First World War from 1916-1919. Her time in the Dandenong’s, spent at Rose Charman’s cottage, brought her into contact with a remarkable group of literary friends. She became an outspoken activist against conscription and the war, a fact made more poignant through having met in London in 1916 her future husband and war-hero Lieutenant Hugo Throssell, V.C.

She was born in Fiji where her father, Tom, was a newspaper editor. The family moved from there to Melbourne. Her father suffered depression and became unemployed forcing her mother, Edith into work as a seamstress. Katharine’s resentment of poverty was the focus of her childhood memoir The Wild Oats of Han penned in her grief at her father’s suicide in 1907 and published in 1928, twenty years after it was first written.

Due to the family’s financial plight she worked as a governess in South Gippsland and her copiously filled notebooks of this time became a touchstone for her later literary endeavours. She began a career as a journalist with the New Idea after the publication of her prize-winning love story, ‘Bush Fires‘ in 1903. A romanticized version of her experiences as a governess was serialised in 1906.

In 1908, armed with a letter of introduction from family friend and Australian prime minister, Alfred Deakin, she travelled to London.

Her first claim to literary fame came when she won the Australian section of Hodder & Stoughton’s All-Empire novel competition for her story The Pioneers (1915).

When Katharine Prichard married Hugo Throssell in 1919 they spent their honeymoon at the Emerald cottage. Thereafter they settled in Western Australia where she wrote her subsequent literary works.

Katharine was a founding member of the Communist Party of Australia’s (CPA) Western Australian branch. She remained a lifelong member of the CPA and when in Russia in 1933 researching her polemical pamphlet, The Real Russia (1934), her husband committed suicide. During the period of anti-communism that characterised Australian politics in the 1950s she remained a tireless advocate of peace and nuclear disarmament and was awarded the World Peace Council medal in 1959.

Her most transformative publication was Working Bullocks (1926) about the small community of timber-getters in the Western Australian karri forests. It marked the beginning of her exploration of unique Australian themes and was followed by Coonardoo (1929) in which she controversially examined the sexual relations between white men and aboriginal women. Prichard’s major work of the post war period was the goldfields trilogy, The Roaring Nineties (1946), Golden Miles (1948) and Winged Seeds (1950).