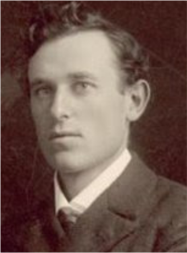 Thomas Esson and his wife Hilda spent time in Emerald after their return from Europe and America in 1921.  They stayed with writers Vance and Nettie Palmer and formed ‘The Pioneer Players’ a group dedicated to the production and performance of local drama. The group’s first performances were in 1922. Esson’s The Drovers, a spare, atmospheric bush play in one act, was staged in 1923. Their last production, after a two-year gap, was Esson’s The Bride of Gospel Place, performed in June 1926.

Esson was raised by his aunts in Carlton and attended Carlton Grammar School. In 1896 he began an arts course at the University of Melbourne but left without completing a degree.

From 1904 Esson published verse and topical paragraphs in the Bulletin. His first contributions included vicarious evocations of Melbourne’s low life and the conventional warnings about Australia’s vulnerability to Japan, a country he visited in 1908 on a trip through south and east Asia.

In 1906 Esson joined the Victorian Socialist Party as a foundation member and soon contributed articles to the Socialist to which he contributed a Bohemian series of articles on Australian institutions. His first full-length play, The Time is Not Yet Ripe, a comedy in four acts, was completed and staged in Melbourne in 1912 before a large and appreciative audience. Esson had also published Three Short Plays (including ‘The Woman Tamer’, ‘Dead Timber’, and ‘The Sacred Place’) and two slim volumes of verse, Bells and Bees and Red Gums and Other Verses, enough to secure a reputation as a promising young writer.

On 15 December 1913, Esson married Hilda Wager Bull. Hilda was a gifted, strong-minded woman with broad interests. Her economic, intellectual and emotional support enabled Louis to pursue his career as a dramatist and freelance writer at a time when writing was a poorly rewarded and disheartening pursuit.

Esson’s last collection, Dead Timber and Other Plays, had appeared in 1920. He was already slowing down and by the late 1920s his career as a dramatist had ended. Between 1924 to 1927 Louis became the Melbourne drama critic for the New Triad from 1924. In this time he tinkered with some of his old plays and toyed with some new themes, but without believing that his efforts would come to anything. Ever suspicious of Melbourne’s deadening atmosphere, he moved to Sydney late in his life, but there was to be no literary rejuvenation.

Louis Esson’s instincts were essentially urban. He loved theatre, night-life, cafés and talk. The Time is Not Yet Ripe was set in Melbourne and his characters ran the gamut from socialist idealism to a constipated liberalism.

Esson died in Sydney on 27 November 1943. Hilda arranged the publication of The Southern Cross and Other Plays in 1946, which included ‘The Bride of Gospel Place’ and ‘Mother and Son’ along with memories of Esson and the Pioneer Players. In 1948 Vance Palmer published a selection of his letters in Louis Esson and the Australian Theatre.